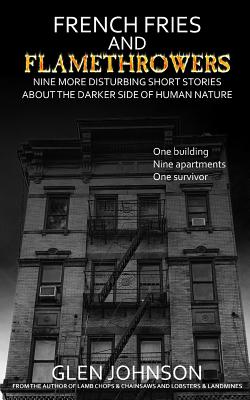 In an old apartment building, a group of people go about their night like any other. However, tonight is different, tonight all their lives intertwines. A night, when against all the odds, a series of events unfolds, culminating in a bloodbath. It's a story of love, madness, sexual perversity, stalking, murder, greed, abuse, voyaging, and betrayal. Also, other, outsider's blood, stains the floors and walls; the Ukrainian mob, the French special forces, and the local police – it's a complete massacre. Follow the complicated life-and-death dance. Read as they die one by one, causing a chain reaction that results in the building burning to the ground. One building. Nine apartments. Nine intertwined stories. Twenty-nine dead, three missing, and only one survivor. 1 The Insomniac Trevor Olsen owns a chip shop, and works every hour sent to keep his business afloat. He struggles to stay awake to keep up with Friday night’s drunken clientele. Due to his exhausted state, as he’s locking up for the night, he makes a fatal error that leaves a dead body on his kitchen floor. He tries to dispose of the body, but in the process, a misunderstanding makes a bad situation much worse. 2 The Taxidermist Fredric Nolan has found a niche in the taxidermist market; small rodents posed in silly stances dressed as humans. He ups the ante, deciding to experiment with cats. Luckily, a neighbour has an abundance of them. He steals one, hoping to practice. However, things don’t go according to plan. 3 The Butcher Anton Gruzinsky is a Russian, who owns a butcher’s shop. He uses the carcasses of animals to transport drugs around southern England for a Ukrainian gang. When he’s asked to help out in their human trafficking ring, he declines. However, his boss isn’t the kind of man you simply say no to. 4 The Florist Elena Fisk grows orchids for a living; she devotes her life to cultivating the delicate flowers. In her attempt to duplicate the perfect environment, she builds a complicated watering system. On the spur of the moment, she buys a new plant food to test the system out – Mephedrone, or otherwise known as Meow Meow. 5 The Lovers Nalin Nhek is a shy, quiet Cambodian who moved to England to work so she can send money home to her family. She falls in love with Isaac Tiggs, a police officer, and their lives seem perfect. However, one random event changes everything. 6 The Animal Lover Gertrude Dodd is housebound, having grown too fat to leave her apartment. Her three dogs, thirteen cats, a parrot, and a collection of rodents keeps her company, which she prefers to humans – to her; they are loyal and trustworthy. However, none of them can come to her aid when she needs help the most. 7 The Agoraphobic Gordon Welts hasn’t left his building in four years. As well as renting out the flats, he makes his money by selling the videos he makes with all his hidden cameras on his specialty website. That is, until one person discovers his secret and puts an end to his little money-making adventure. 8 The Foreigner Samira Hussaini is an Afghanistan immigrant. She is quiet and polite and works as a cleaner. Or is she? Sometimes things are never as they seem. 9 The Geek Benedict Kock is a thirteen-year-old who if left home alone every night, while his mother struggles to pay the bills. Ben is bullied relentlessly at school. However, his school project is finally finished; something that will make everyone realise that he’s not just a weakling loser.
Reviews from Goodreads.com