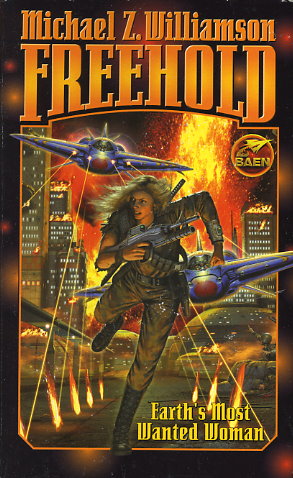 Sergeant Kendra Pacelli is innocent, but that doesn't matter to the repressive government pursuing her. Mistakes might be made, but they are never acknowledged, especially when billions of embezzled dollars earned from illegal weapons sales are at stake.

But where does one run when all Earth and most settled planets are under the aegis of one government? Answer: The Freehold of Grainne. The only developed system that belongs to neither the UNES nor the Colonial Alliance. A locus in space for business, both legitimate and otherwise, and independent-minded people who brook no interference. There, one may seek asylum and wait a few years for problems to blow over, as long as one has enough money to pay one's way. The problem is, rogue nations are a threat to the status quo, especially when they have the gall to be wealthy, productive and popular with their residents. And wealth and gross domestic product only count for so much when a small star nation meets a large one.

Kendra has clawed her way out of refugee status, built a new life in a society that doesn't track its residents' every move, survived the attack on and invasion of her home, trained a resistance cell using her unique knowledge of the enemy and is fighting a desperate war for survival against superior numbers, bioweapons, kinetics, and people who still don't trust that stranger from Earth. But now things are about to go royally to hell.

Because Earth's government has found out where she is .. .