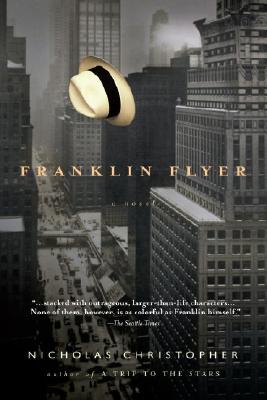 Share:
In this shimmering work of fiction, Nicholas Christopher follows the remarkable life of Franklin Flyer–a restless young inventor named after the train on which he was born–through the tumultuous years of the Great Depression, into the Second World War.

Raised by his suffragette aunt, at various times a vagabond and tycoon, Franklin travels across the U.S.A and around the globe, seeking adventure and enlightenment, charting his fate by pursuing the unexpected.

He encounters a glittering cast of characters: among them Rita Hayworth, Josephine Baker, OSS founder “Wild Bill” Donovan, and a host of political zealots, opportunists, and dreamers thrown together in a world on the brink of collapse.

With each new invention–devices that help to revolutionize everything from early television to the technology with which the Allies respond to the Axis powers–Franklin makes his mark. Gaining fame and fortune, he also suffers terrible heartbreak, and through numerous transformations discovers that a man’s own life is truly his most difficult, and rewarding, invention.

A brisk, vivid blend of history and imagination, Franklin Flyer brings to life an American hero as unforgettable as his times.