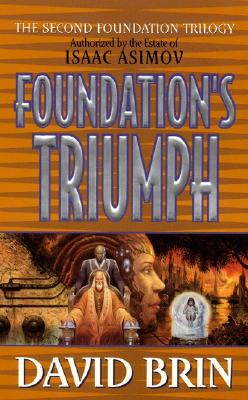 Isaac Asimov's Foundation Trilogy is one of the high-water marks of science fiction. The monumental story of a Galactic Empire in decline and a secret society of scientists who seek to shorten the coming Dark Age with tools of Psychohistory, Foundation pioneered
many themes of modern science fiction. Now, with the approval of the Asimov estate, three of today's most acclaimed authors have completed the epic the Grand Master left unfinished.

The Second Foundation Trilogy begins with Gregory Benford's Foundation's Fear, telling the origins of Hari Seldon, the Foundation's creator. Greg Bear's Foundation and Chaos relates the epic tale of Seldon's downfall and the first stirrings of robotic rebellion. Now, in David Brin's Foundation's Triumph, Seldon is about to escape exile and risk everything for one final quest--a search for knowledge and the power it bestows. The outcome of this final journey may secure humankind's future--or witness its final downfall...