Forever and Beyond — Penelope Neri 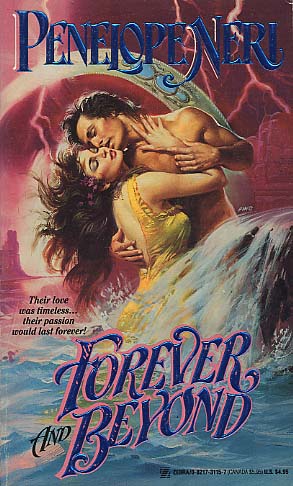 Share:
SHE WOULD ALWAYS BE HIS
Badly in need of a change, newly divorced Kelly Michaels traveled to Arizona to forget her troubles and put her life in order. But instead of letting go of her past, Kelly was haunted by nightly dreams of a raven-haired Indian warrior who drove away her worries with his powerful loving, kissing her tenderly, caressing her boldly and pledging his undying love. His searing touch was more than intimate--it was oddly familiar. And as he sensed her deepest desires, filling her with a consuming ecstasy, Kelly knew her handsome, bronze-skinned lover was no phantom, for the passions he awakened with his teasing touch were all too real. He seemed to be calling her back to another time, to a place where they would find a chance to love again.

HE WOULD ALWAYS BE HERS
To the proud Comanche warrior White Wolf, it seemed that a hundred years had passed since the spirit of his beloved wife had taken flight into another world. For many moons, he'd shared blissful days of tenderness and nights of scorching passion with his wondrous blue-eyed treasure, reveling in the satiny feel of her ivory skin, her lustrous dark tresses, her firmly rounded curves--until a great tragedy had robbed his precious Blue Beads of her very soul, leaving White Wolf with a mere shell of a woman. But now, the spirits had granted him the power to reclaim her from the world of tomorrow, and White Wolf vowed to hold her in his arms again, to bring her back to the place where their love would last FOREVER AND BEYOND