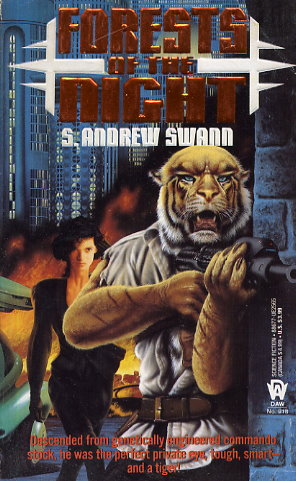 That was the first thing Nohar Rajasthan had learned, back when he was still a cub, back when his parents led a bloody moreau rebellion and left him an orphan. It was then he realized that, to humans, moreaus -- the various animal stocks genetically manipulated to blend human characteristics with animal traits their human creators found useful -- were barely second-class citizens, no matter what the "enlightened" U.S government of the twenty-first century said to the contrary.

Gifted with natural martial abilities, a heritage from his tiger sock warrior parents, Nohar now eked out an existence as a private eye, dealing exclusively in moreau cases. Then, against his better judgment, his funds almost gone, he accepted a commission to investigate a human case, the death of the campaign manager of a powerful politico who was making a bid for the Senate. And suddenly Nohar found himself targeted by everyone from the local cops to federal agents to a dangerous drug-running moreau street gang to a canine assassin with a 100% kill rate. And he hadn't even met the real enemy yet!