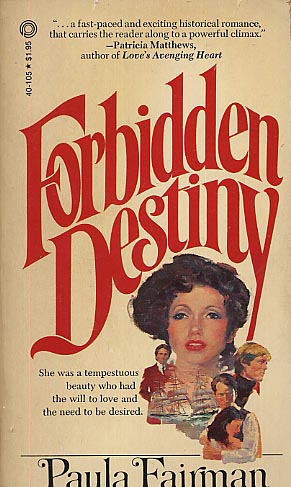 Love or Hate?
Their searing passion drove them to magical heights of ecstasy...

Forced into the employ of a lustful tavern-keeper whose rapacious attacks made her his slave by night as well as by day, orphaned Kate McCrae escaped from the squalor of her life by stowing away on Captain Jason Steele's whaler. But Jason, jilted on his wedding eve, his manhood threatened, himself took brutal advantage of Kate's young and voluptuous body. And so she quickly learned that in order to survive, she must turn a man's carnal desires to her own advantage. But first she would punish Jason Steele for his betrayal-punish him to assuage her own guilt, for she had fallen in love with this handsome, bitter man who mistreated her so savagely.

Thus begins a tumultuous saga of wild lust, all-consuming desire, and the tender yet violent love that binds Kate to the one man she wants, and to the many men who want her. Lying, cheating, scheming--all are part of Kate's plan. But nothing can stifle her love for Jason, a love that transcends time, distance, and the limits of human passion.
Reviews from Goodreads.com