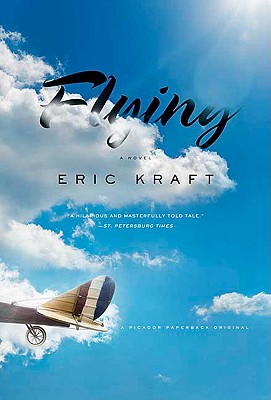 Share:
Critics have compared him to Proust, Pynchon, and Fred Astaire--an artful, slyly intelligent, wildly inventive observer of Americana. Now Eric Kraft has landed an ambitious comedy set both in our present and in an alternative 1950s universe--Flying.


It is the tail end of the 1950s, and in the town of Babbington, New York, a young dreamer named Peter Leroy has set out to build a flying motorcycle, using a design ripped from the pages of Impractical Craftsman magazine. This two-wheeled wonder will carry him not only to such faraway places as New mexico and the Summer Institute in Mathematics, Physics, and Weaponry, but deep into the heart of commercialized American culture, and return him to Babbington a hero. More than forty years later, as Babbington is about to rebuild itself as a theme park commemorating his historic flight, Peter must return home to set the record straight, and confess that his flight did not match the legend that it inspired.


Drawing together Eric Kraft's previously published Taking Off and On the Wing with the brand-new final part of the story, Flying Home, Flying is a buoyant comedy of remarkable wingspan, a hilarious story of hoaxes, digressions, do-it-yourself engineering, and the wilds of memory--and a great satire of magical thinking in America.