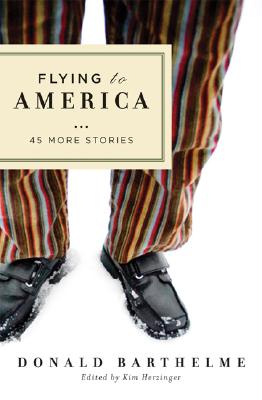 Donald Barthelme was one of the most influential and inventive writers of the twentieth century. Through his unique, richly textured, and brilliantly realized novels, stories, parodies, satires, fables, and essays, Barthelme redefined a generation of American letters. To John Hawkes, he was one of our greatest of all comic writers.” Robert Coover called him one of our great citizens of contemporary world letters.” And to Thomas Pynchon, who coined the term Barthelismo, his work conveyed something of the clarity and sweep, the intensity of emotion, the transcendent weirdness of the primary experience.”

This collection presents all of Barthelme's previously unpublished and uncollected short fiction, as well as work not published in his two compendium editions, Sixty Storiesand Forty Stories. Highlights of Flying to America include three unpublished stories, Among the Beanwoods,” Heather,” and Pandemonium”; fourteen stories never before available in book form-from his first published story, Pages from the Annual Report” (1959), to his last, Tickets” (1989); and the long out-of-print Sam's Bar, with illustrations by Seymour Chwast. With Flying to America, fans and new readers alike have the huge pleasure of a new collection from one of America's great literary masters.
Reviews from Goodreads.com