Flowers for the Judge / Legacy in Blood — Margery Allingham 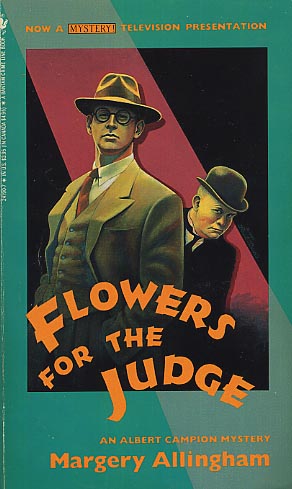 A tall, thin man with overly large spectacles, he is deceptively unobtrusive when tracking down a killer and uncannily capable of predicting the deadly twists of a criminal's mind. He is unquestionably a gentleman, but even Lugg, his dauntless valet, and his friends at Scotland Yard don't know all the secrets in Campion's past--or the confidential cases he has covertly solved while in His Majesty's Service.

The Body That Wasn't There

One morning Tom Barnabas, of the famous book publishers Barnabas and Company, said "Good morning" to his housekeeper, started down a wide suburban street, and never arrived at the tobacconist on the corner. He had simply vanished into thin air. Twenty years later, his cousin Paul, also of Barnabas and Company, met his most strange and untimely end in the musty basement of the firm's headquarters--by being murdered. Campion knew the two mysteries were connected. He also knew that the man sitting in the dock at Old Bailey was innocent of Paul's death. But proving it would lead Campion out into a thick London fog and the most tangled and dangerous murder scheme he had ever found.