Flight of the Storks — Jean-Christophe Grange 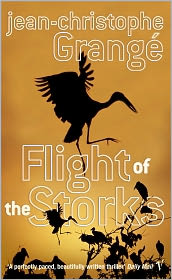 
Every year the storks set off on their miraculous 12,000-mile migration from Northern Europe to Central Africa. Then one year, inexplicably, they do not return.At the invitation of the wealthy Swiss ornithologist Max Boehm, a young French academic, Louis Antioch, agrees to undertake a journey tracing the flight of the storks in an attempt to solve the mystery of the birds' disappearance. Before Antioch can set off on his trip, however, Boehm dies of a heart attack under suspicious circumstances, or so the police believe.This is the background to Jean-Christophe Grange's pulsating and darkly mysterious new thriller. Its plot moves at a dramatic pace, from a Bulgarian Gypsy encampment to Israeli kibbutzim and to Calcutta from the green jungles of Central Africa. As the mystery deepens, it becomes clear that it is not only the stork that is an endangered species.