Flesh of the God — Lauren Haney 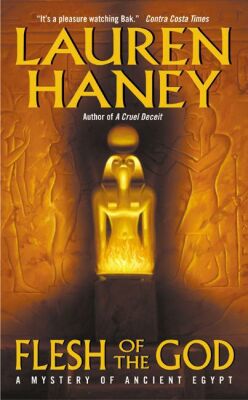 A proud officer in the service of Queen Hatshepsut, it was Lieutenant Bak's great misfortune to lead his charioteers in a raid of a house of pleasure frequented by Egyptians of very high station. Reassigned for his transgressions, Bak is exiled to Buhen -- a fortified city in the most desolate part of the Nile valley. Barely has he set foot in this nest of vipers when he discovers Nakht, Buhen's capable commandant, slain with a dagger in his breast -- and Nakht's very beautiful, young wife covered with fresh blood. Bak's carefully honed instinct makes him hesitate to condemn the frightened widow. Perhaps the man's death was divine retribution for recent offenses directed toward the gods. Finding the truth in this terrible place will be as difficult as finding water in the heartless desert that surrounds it -- while more death may be far too easy to come by.