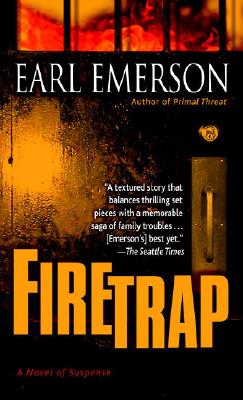 Share:
No one writes with the power, authority, and poetry that Earl Emerson has demonstrated in his action-packed novels about fire and the people who make their living fighting it. In Firetrap, Trey Brown is a man tormented by race, by family, and now by a political firestorm that has erupted because fourteen people died in an illegal Seattle nightclub . . . and someone must take the fall.

Captain Trey Brown is a black man in a Seattle fire department where the color of his skin keeps him largely on the outside looking in. As a child, Trey was adopted by a white family whose children were bred for wealth and power -- but now Trey simply does his job, rides his Harley, and lives in bitter solitude. Then the Z-Club goes up in flames, killing more than a dozen people, all of them black, and the city's African American community demands to know: Did these people die because of their skin color?

Jamie Estevez, the beautiful, ambitious reporter who becomes Trey's partner in the investigation, is everything Trey is not. Outgoing and gregarious, she tries to bring the lone-wolf fireman back into the world. But as their relationship heats up, Trey is forced to relive a painful episode from his past, when he was accused of a horrible crime and shunned by his adoptive parents. Suddenly, two mysteries -- one of passion and family, the other of fire and murder -- are unraveling around Trey. But so is everything he has done to protect himself. . . .

Firetrap is vintage Earl Emerson: a gritty, emotionally charged novel set in a world of camaraderie and urban chaos, where one man has been a hero, a villain, and a victim -- and hasn't even faced the deadliest danger yet.