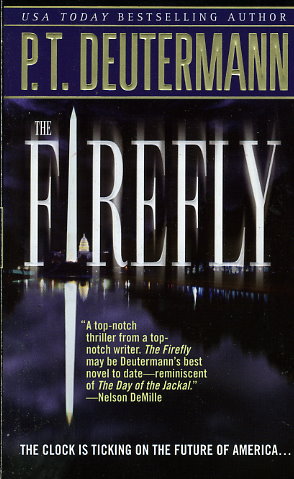 Share:
FIREFLY: A SMALL BUT CREDIBLE THREAT TO NATIONAL SECURITY.

TICK
According to the D.C. cops, the fiery destruction of an upscale plastic surgery clinic and its staff is just business as usual. With the whole city on high alert because of the upcoming presidential inauguration, the Secret Service can afford to let it go. Retired agent Swamp Morgan pulls what appears to be a "firefly" case -- until he digs deeper.

TOCK
Facts don't add up. A German man, the clinic's last client, has vanished. The only surviving nurse is almost killed. And a mysterious tape indicating an imminent threat against the government puts Morgan on full alert, but his handlers refuse to listen to his warnings.

TIME BOMB
Morgan's in a race against time as the deadly pieces fall into place. Fighting the odds, he's got to shut down the brilliant plan to assassinate the incoming and outgoing presidents before America falls into total chaos -- or die trying!