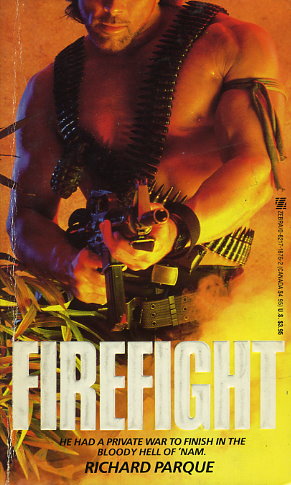 Share:
MONTANA JONES PICKS UP WHERE RAMBO LEFT OFF!
He was a battle-hardened veteran of the green hell that was Vietnam. Then he traded his steel pot for a Stetson and the napalm-scorched jungle of Nam Dinh for the dusty rangelands of the Rockies. For Marine captain Montana Jones the war was over...until the cablegram arrived from 'Nam that said Please help me. And Montana knew he had to go back -- because his own private war had just begun.

RETURN TO NAM DINH
It has been seven years since Montana last lined up a Charley in his gun sights. Now Communist hordes swarmed over the countryside, surging south toward Saigon and victory. But Montana headed north, alone except for the M-16 on his shoulder and the holstered .45 on his hip. North to the blue-green hills that shelter the Nam Dinh Valley...to find the raven-haired, golden-skinned wife he'd thought was dead...to rescue her from the Cong in one final, blood-drenched FIREFIGHT.