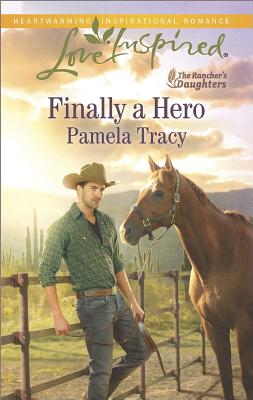 Jesse Campbell's determined to forget his past. He's moving to a dude ranch in Arizona to start getting his act together. Parenthood isn't part of the picture -- until Jesse meets the son he didn't know he had. Now Jesse has some new goals: learning to be a good father -- and a good man. The kind of man Eva Hubrecht, his boss's daughter, can trust. He knows Eva isn't happy about Jesse and Timmy coming to the Lost Dutchman Ranch, but the little boy soon starts to win her heart. Jesse can only hope that with time and patience, this rancher's daughter will find room in her life for him, too.

The Rancher's Daughters: Sisters find hope, love and redemption in the Arizona desert.
Reviews from Goodreads.com

Finally a Hero by Pamela Tracy
The Rancher's Daughters Book One
Jesse Campbell's life had been tough and it was about to get tougher. He was leaving prison a changed young man. He had a job waiting for him and he was now a Christian. Nothing is ever as easy as it seems. His first challenge walking through the gate was the woman waiting for him. His mother. And she had a big surprise for him.

Eva Hubrecht needed to get their ranch in the black and her dad wasn't helping much. For instance, hiring an ex-con was not in their budget. Especially this man. Eva's two sisters had moved on and it was up to her to keep things going.

I loved this story. Jesse faced the real struggle of facing the world after being in prison. Being prejudged before he had a chance to prove himself. And on top of that, he finds out he has a son he never knew about. What a great journey this story takes the reader on as it shows the different struggles of the characters.
http://justjudysjumbles.blogspot.com/2011/09/pamela-tracy-booklist.html