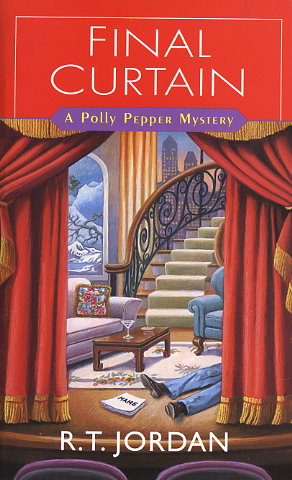 Share:
Polly Pepper, the legendary superstar of television's golden age, is finally back in the entertainment headlines. She's landed the title role in a new production of the musical Mame, and though it's off-off-off-off Broadway (Glendale, California, actually), Polly's bank account--and her ego-- need the job. There's one minor detour, though: on the second day of rehearsals, wunderkind director Karen Richards turns up dead.

Of course Polly's nose for news needs to know, and though Karen was well liked, it seems some last-minute casting changes did her in. Sadly, Polly's Suspect #1 is her new friend and co-star Sharon Fletcher. Sharon was the last person seen with the deceased director...and her Emmy matches the dent in Karen's head.

The more Polly sniffs, the surer she is that Sharon didn't haul off and bash Karen with her Emmy. But the evidence is mounting, and it'll take all of Polly's wits to save the jailed soap star from a murder rap...and a starring role in a real-life drama tentatively entitled Framed!