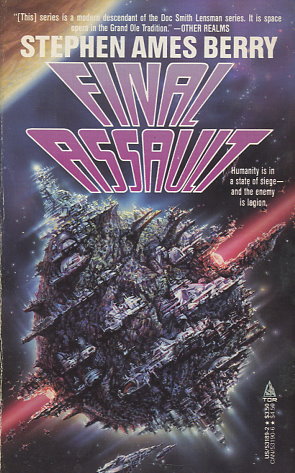 Successfully completing a "suicide" mission in the forbidden quadrant, the battle cruiser Implacable returns to homebase and finds Fleetops in turmoil. Commodore J'Quel D'Trelna is stripped of his command, the Implacable is impounded and her crew thrown into detention.

Thousands of lightyears away the two Terrans, Harrison and Tal, are engaged in deadly combat with the powers of Terra Two. The dimensional portal is sealed and they are stranded on the wrong side.

A devastating force of Al battleglobes is in the final stages of preparation...ready to invade and conquer human-occupied space. In a desperate bid for survival humanity must regroup, calling forth men and machines of the lost Empire, for nothing short of a miracle will save them from the The Final Assualt
Reviews from Goodreads.com