Fiance at Her Fingertips — Kathleen Bacus 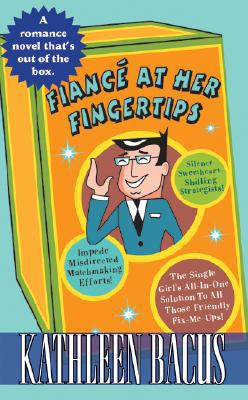 Debra Daniels thinks she's found the answer to the age-old question women have been plagued with ever since Eve first said "Why not?" when Adam asked her on a stroll through the Garden. In need of a break from her matchmaking mother and a score of hellish blind dates, to Debra the do-it-yourself boyfriend-in-a-box kit is a gift from Above.

-Fiance at Your Fingertips: Touted as the single woman's best defense against pitying looks and speculative stares, it comes with everything the single-and-slightly-desperate woman needs to convince friends, family and coworkers that she has indeed found Mr. Right. And "Lawyer Logan" is definitely that. Tall, handsome...and fictitious. Debra is going to have an absolute blast with her faux beau--until he shows up on her doorstep, acting as if he has every right to be there and in her arms. That'll be the start of a romance truly outside of the box, and where the real fun begins.
Reviews from Goodreads.com