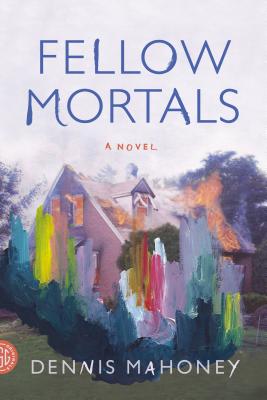 Share:
An affecting story about how relationships are built -- and burned -- by desperate needs and obligations

When Henry Cooper sets out on his mail route on Arcadia Street one crisp spring morning, he has no idea that his world is about to change. He is simply enjoying the sunshine as he lights up a cigar and tosses the match to the ground, entirely unaware that he has just started a fire that will destroy a neighborhood and kill a young wife.

Even though the fire has been put out, it has ignited a lurking menace in an otherwise apparently peaceful suburb. In Fellow Mortals, Dennis Mahoney depicts the fire's aftermath in the lives of its survivors. There's Henry's wife, Ava, devoted to her husband but yearning to recover a simpler time in their marriage. There's the angry neighbor, Peg, who wants Henry to pay for what he's done, no matter the cost -- which ends up being grave. And then there's Sam Bailey, the sculptor who lost his wife in the fire and has retreated to the woods to carve mysterious figures out of trees. As Sam struggles to overcome his anger and loss, Henry becomes the focal point of deepening loyalties and resentments, leaving them all vulnerable to hidden dangers and reliant on the bonds that have emerged, unexpectedly, from tragedy.

With sparse and handsome prose reminiscent of Raymond Carver and early Stewart O'Nan, Mahoney's probing first novel charts the fall of a man who has spent his life working to be decent and shows us a community trying desperately to hold itself together.