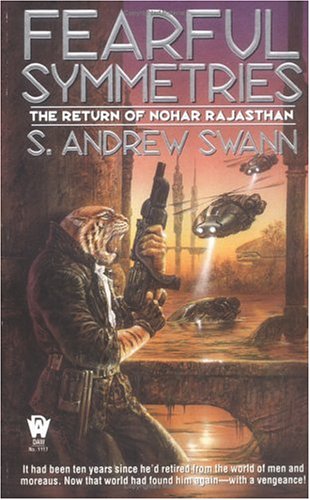 Nohar Rajasthan was a second-generation moreau, descended from tiger stock which had been manipulated by human geneticists to be the perfect fighting machine, sent out to die in wars fought for their human creators. After the wars, the surviving moreaus had to be integrated into society. And though they walked upright, could think for themselves, and could speak, they remained second-class citizens, barely tolerated in the human world.

Nohar had learned how to survive in that world. He'd even managed to make a living as a detective, his one rule being never to take a human case. And the one time he broke that rule was the time he came closest to meeting his death. But Nohar was retired now. He'd left human and moreau 'civilization' behind a long time ago, and was happy living alone in his cabin. At least until the human lawyer, Charles Royd, showed up, asking him to come out of retirement and take on one special case.

Nohar had turned Royd down flat, wouldn't even hear what the case was about. That should have been the end of it. But then a squad of assassins came after him. And suddenly Nohar didn't have a choice. He had to take on the case -- if only to find out why someone was suddenly trying to kill him!