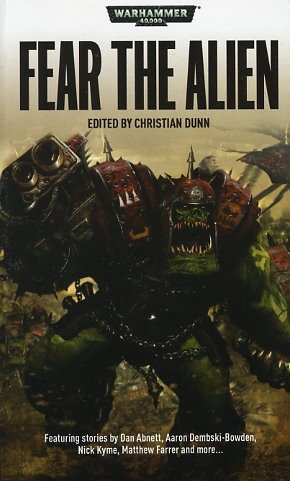 Share:
The Imperium of Man has many enemies among the stars, but none are reviled so much as the alien. Dangerous races seek to destroy humanity wherever they turn - the brutish orks, the ravening hordes of the tyranid, the unrelenting necrons and the mysterious forces of the tau and the eldar.

Across the universe, humanity and their defenders, the Space Marines, seek to eradicate these xenos threats. Yet all they can hope for is another day of survival - for to stand against the alien is to enter an unending war...

The following short stories comprise this unmissable collection for fans of Warhammer 40,000 and military science fiction.


Gardens of Tycho by Dan Abnett
Fear Itself by Juliet E. McKenna
Prometheus Requiem by Nick Kyme, a companion story to the Tome of Fire trilogy
Mistress Baeda's Gift by Braden Campbell
Iron Inferno by C.L. Werner
Sanctified by Mark Clapham
Faces by Matt Farrer
Unity by James Gilmer
The Core by Aaron Dembski-Bowden, a companion story to the Night Lords trilogy
Ambition Knows No Bounds by Andy Hoare