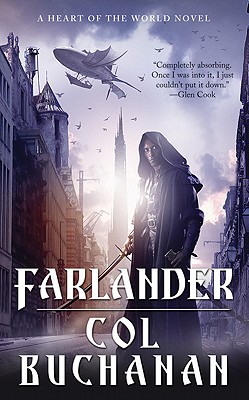 The Heart of the World is a land in strife. For fifty years the Holy Empire of Mann, an empire and religion born from a nihilistic urban cult, has been conquering nation after nation. Their leader, Holy Matriarch Sasheen, ruthlessly maintains control through her Diplomats, priests trained as subtle predators.

Ash is a member of an elite group of assassins, the Roshun, who offer protection through the threat of vendetta. Forced by his ailing health to take on an apprentice, he chooses Nico, a young man living in the besieged city of Bar-Khos. At the time, Nico is hungry, desperate, and alone in a city that finds itself teetering on the brink.

When the Holy Matriarch's son deliberately murders a woman under the protection of the Roshun; he forces the sect to seek his life in retribution. As Ash and his young apprentice set out to fulfil the Roshun orders, their journey takes them into the heart of the conflict between the Empire and the Free Ports . . . into bloodshed and death.
Reviews from Goodreads.com