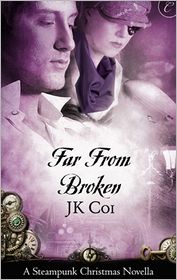 Colonel Jasper Carlisle was defined by his work until he met his wife. When the prima ballerina swept into his life with her affection, bright laughter and graceful movements, he knew that she was the reason for his existence, and that their love would be forever.

But their world is shattered when Callie is kidnapped and brutally tortured by the foes Jasper has been hunting. Mechanical parts have replaced her legs, her hand, her eye...and possibly her heart. Though she survived, her anger at Jasper consumes her, while Jasper's guilt drives him from the woman he loves. He longs for the chance to show her their love can withstand anything...including her new clockwork parts.

As the holiday season approaches, Jasper realizes he must fight not just for his wife's love and forgiveness...but also her life, as his enemy once again attempts to tear them apart.