Family Over Everything — Paige Green 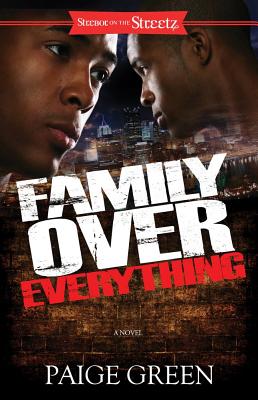 Share:
Being raised in the raw, gritty streets of Northview Heights in Pittsburgh isn't easy.

Twin brothers, Deion and Day'onne Jenkins, have grown up in the cold streets of the Pennsylvania community with their adopted mother, Melissa, and their younger sister, Corrine. Deion, a young, aspiring writer, tries his best to stay out of trouble and keep his hands clean. But it's a challenge with his brother's hard, ruthless ways. Day'onne, who continuously wreaks havoc throughout the city, does whatever it takes to get on top with the help of his best friend, Menace. But after crossing the wrong person, Jewels, who is a vet in the drug game, things turn for the worst in all of their lives. Corrine, who is on the path of destruction, also gets caught up in the fire.

When push comes to shove and Deion's family is in dying need of his help, will he swallow all of his fears for his family and put them over everything? Or will he continue onto his road to success and forget about the streets of Northview Heights that he tried his best to escape from?