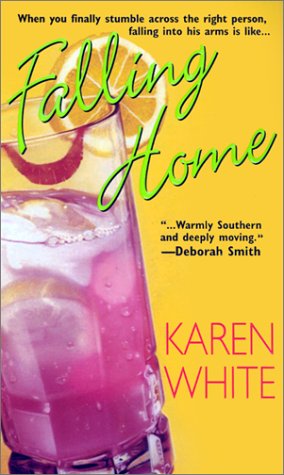 It's true. Take me, for example. I shook the Georgia dust from my feet fifteen years ago, vowing never to leave Manhattan. I traded sweet tea for Chardonnay, fried chicken for nouvelle cuisine, lazy days on my aunt's front porch for ad campaigns and board meetings, and the guy who broke my heart for my handsome boss, who soon became my fiance. Perfect, right?

Until my sister called. We haven't spoken since I left home--because she married the guy who broke my heart. What's more, she called to say my father is dying--but he refuses to finish until I show up. So I'm back in the hottest, dinkiest small town in Georgia, facing my sister and my old boyfriend over the heads of their--count them--five children. It couldn't get weirder, right? Unless you count Sam Parker--a long-forgotten classmate, now the town doctor--and how good he's beginning to look to me. I'm falling apart, I think, wondering why resentment and wounded pride seem silly here in Walton, where forgiveness and acceptance go hand-in-hand with homecoming. And I'm beginning to suspect that I'm falling in love for real this time, with a man whose touch is so right, I feel like I'm... Falling Home

Revised and expanded for this new trade paperback edition, Karen White's novel tells a poignant story of two estranged sisters. At twenty Cassie Madison left her hometown of Walton, Georgia, for New York City, where she has reinvented herself-from losing herself in her career to squashing her accent. But one night a single phone call brings back everything she's tried to forget. She hasn't spoken to her sister since Harriet stole Cassie's fiancé and married him. But now Harriet's on the line with news that their father is dying.

As she makes the trip back, the only thing that frightens Cassie more than losing her father is seeing Harriet and the family that should have been hers. But she can't help loving her nephews and nieces any more than she can help feeling at home again in Walton. As she fights a surprising reaction to a forgotten friend, and faces an unexpected threat to the family she'd once left behind, Cassie comes to realize that moving on doesn't always mean moving away from who you are.