Face Down Across the Western Sea — Kathy Lynn Emerson 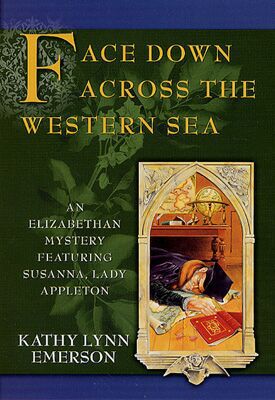 Anxious to prove England's claim on the New World, Queen Elizabeth has charged Sir Walter Pendennis, seasoned spy and diplomat, with the top-secret mission. Walter gathers a team of scholars at his Cornwall estate, and calls upon his dear friend Susanna, Lady Appleton, to assist. Susanna is an expert herbalist with a quick mind and wise ways-and Walter has long carried a flame for her.

When Walter's wife appears uninvited at Priory House, she sets about extinguishing that flame. Meanwhile, Susanna and Walter find that troubling discrepancies have surfaced among sailors' accounts of the land beyond the Western Sea. Their research becomes intrigue when an eyewitness account turns up missing and a scholar is found dead in his study. Is the murder the work of an academic rival? A jealous lover? A Spanish spy?

Scholarly trickery and New World scandal come to light as Susanna's sleuthing skills are put to the test.

Face Down Across the Western Sea is a potent concoction, brimming with the qualities that have made the Susanna, Lady Appleton, series a favorite among mystery lovers: rich period detail, first-rate suspense, and at the center of it all, Susanna-a headstrong and beguiling heroine.
Reviews from Goodreads.com