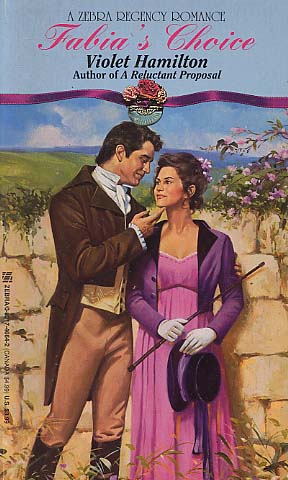 Share:
HE WAS AN OFFICER...BUT WAS HE A GENTLEMAN?

The calendar said Spring, but a cold wind chilled Dorsetminster's daffodils and Miss Fabia Thurston. Yearning for her balmy childhood home in the West Indies, the nineteen-year-old orphan took a misstep on Market Street and tumbled--right into strong masculine arms! Captain Richard Goring had a twinkle in his eyes and a smile that brought sunshine into Fabia's lonely rife...and what beau could be more ideal than a naval hero whose father was a baronet?

Then Fabia discovered who else Richard was--brother to the scoundrel who'd shattered her poor sister's love life! Fabia might have lost her heart--but not her pride. Her decision was made: She would wed another. But when her intended turned out to be an utter cad, and Richard was seen about town with a husband-hunting flibbertigibbet,
Fabia realized she'd made a ruinous mistake...until a ;mitten and resourceful captain devised a plan to clear his brother's name and win the lady he loved.