Even Villains Have Interns — Liana Brooks 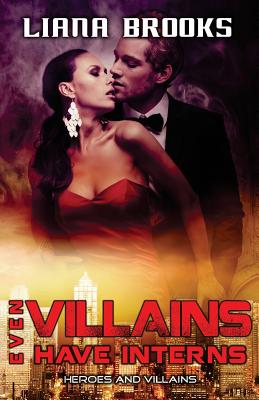 It's Chicago's favorite city son vs Delilah, daughter of Dr. Charm. America's second city will never know what hit it. Bootleggers, drug dealers, crooked cops, and dirty politicians... Chicago has always had a reputation for indulging in the finer vices of life. That’s why Doctor Charm’s favorite daughter found America’s Second City so appealing; criminals are never boring. As second in command for the powerful Subrosa Security group, Delilah Samson finds opportunities to use her superpowers at every turn. Whether it’s stealing a priceless French painting from a mobster or stopping a drug deal, she’s game. In fact, the only thing she doesn’t care for is Chicago’s favorite native son, Deputy Mayor Alan Adale, the man who made Lucifer jealous. Sinfully handsome, or possibly just sinful, Adale has been pursuing Delilah since she first arrived, and she’s been dodging. When she finds ties between the new kingpin in town and a drug The Company wants to buy so they can create more superheroes, Delilah takes the gloves off. Teaming up with the spooky Spirit of Chicago, she aims to take down the dealers, the mobsters, the kingpin, and The Company. All without falling in love with the one man capable of capturing her heart.
Reviews from Goodreads.com