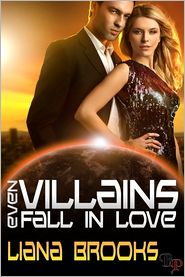 If you believe the rumors you know that Doctor Charm, the wickedly sexy super villain, retired in shame seven years ago after his last fight with the super hero Zephyr Girl. The fact that the charming Evan Smith—father of four and husband of the too-beautiful-to-be-real Tabitha—bears a resemblance to the defeated Doctor is pure coincidence. And, please, ignore the minions. Everything is perfect in the Smith household, until Tabitha announces her return to work as a super hero. Evan was hoping to keep her distracted until after he rigged the presidential election, but—genius that he is—Evan has a backup plan. In his basement lab, Evan has a machine whose sole purpose is keeping Tabitha hungry for him. But children and labs don’t mix. The machine is broken, and Tabitha storms out, claiming she no longer knows him. World domination takes a back seat to meeting his daughters’ demands to get Mommy back right now. This time his genius isn’t going to be enough—he’s going to need both his evil alter-ego, and the blooming super abilities of his children to save his wife. But even his most charming self might not be enough to save their marriage.
Reviews from Goodreads.com