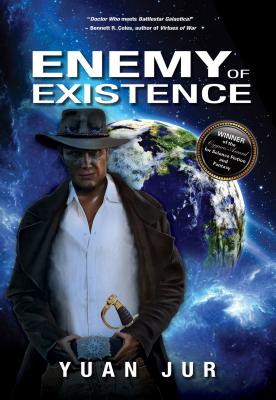 Share:
"Nothing's as it seems!"
Planet Earth finds itself in the sights of the Evercycle Council, creators of existence. The entire Superverse plunges toward cataclysmic war and Earth holds the unlikely key to salvation.
The Council orders two Superverse wardens to Earth to recruit their newest apprentice. The wardens, Uniss and Dogg, arrive in Australia s Outback in 1963 knowing only that this mysterious recruit is more than he seems and he s currently incarnated as an Aussie lad named Ben Blochentackle.
Uniss and Dogg eventually convince Ben that they re intercosmos wardens, fast-tracking the trio to the alien world Tora. There, they discover that failure to prevent a brewing conflict on Tora could unleash the looming Superverse war and that Ben himself may be the only hope for survival of all existence.
Enemy of Existence begins the sweeping story of Ben Bloch and his crew of intercosmos allies. Together they must fight to ensure existence does not implode at the hands of a greater intelligence obsessed with only one objective: perfection.