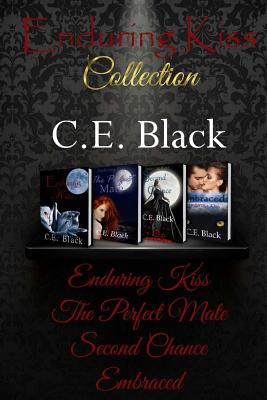 Books 1-4 of the Enduring Kiss Series
ENDURING KISS
Traumatized by a vicious past, Jessica finds solitude and safety as a feeder for Savannah's Master Vampire, Lucas Christensen. He's been a saving grace in Jessica's life. But over the years she's grown too attached to the mysterious vampire, putting her perfect job, and safety, in jeopardy.
THE PERFECT MATE
When Susan stops in Savannah, Georgia after a year on the run, she finds more than she bargained for. She's looking for freedom, not a mate, but she can't ignore the burning desire she feels for Paul. Paul's waited a lifetime to find his mate. Can Susan be the woman he needs?
SECOND CHANCE
Rebecca and Sean have been hot for each other for a long time. Knowing they weren't meant to be, neither has stepped up to take it to the next level. As Rebecca struggles with trying to move on from her mate's death five years ago and deciding if she should plunge into a relationship with Sean, a Master Vampire comes to town threatening a takeover. Rebecca now has to worry about a dark secret she's kept hidden from her new pack, as well as the return of a past love.
EMBRACED
Lonely and more than a little depressed, Sean finds himself in a small town bar, drinking his sorrows away, knowing the woman he loves will be married the next day to her true mate.
When he meets Sarah, they are both surprised at the intense attraction they share. The night is filled with a passion neither can forget, and Sean becomes confused as to why he's falling for another woman he cannot have. Sarah is human after all, and it's impossible for her to be his mate. One night is all they'll have.
Rogue wolves threaten the small ocean-side town Sean loves, and it's his job to fix the problem. Things don't work as planned, and he's summoned home only to find his worst nightmare. A death of a loved one brings Sean to his lowest, but when Sarah shows up, he's surprised to find she's not as human as he thought.
Reviews from Goodreads.com