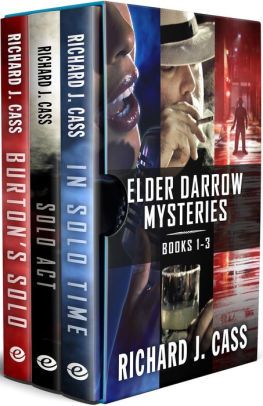 Share:
A collection of three ebooks in the Elder Darrow Mystery series—In Solo Time, Solo Act, and Burton’s Solo—featuring Boston’s favorite bar owner and sleuth. In Solo Time  Elder Darrow uses the last of his trust fund money to buy the Esposito, a bucket-of-blood bar in Boston. But before he can turn the place around, the body of a jazz guitar player shows up on the club’s stage. When Elder’s drinking partner turns up dead after being suspected of the murder, he’s drawn into the unraveling of a political conspiracy.Solo Act When Elder hears that his ex-lover, jazz singer Alison Somers, has killed herself in New York, he encounters a beautiful collector of jazz memorabilia, a Native American gangster with aspirations to management, and a bomb-throwing piano player while trying to uncover the real story . . .Burton’s Solo Elder Darrow’s best friend, homicide detective Dan Burton, becomes the prime suspect in the murder of a clothing designer. Elder hides him in the old family place in New Hampshire, while they expose an evil scheme by which illegal immigrants were effectively enslaved to work in sweat shops—and prove Burton’s innocence.Praise for Richard Cass and the Elder Darrow Mysteries“Richard Cass writes the kind of mysteries I first fell in love with—clever, twisty, and brimming with characters as colorful as they are well-drawn.”—Chris Holm, Anthony Award-winning author of Michael Hendricks Novels “Cass’s version of noir Boston is dark and beautiful as a back alley after a morning rain.”—Gerry Boyle, author of the Jack McMorrow Mysteries