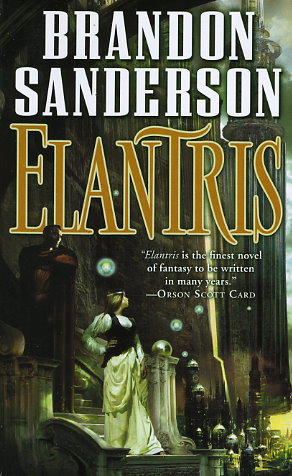 ELANTRIS
was the city of the gods. What power could have cursed it?

RAODEN, prince of Arelon, was loved by all, including the princess he'd never met. Where has he gone?

HRATHEN, high priest of Fjordell, will convert the people of Arelon or kill them. How will he decide?

SARENE, princess of Teod, was a widow before she was ever married. Who can stand against her?

With ELANTRIS, Brandon Sanderson, fantasy's new master storyteller, carries you away to "a truly original world of magic and intrigue, with the rigor of the best science fiction [and] magnificent characters [that] make this novel unforgettable" (Orson Scott Card). Elantris delightfully proves that a great complete fantasy story can still be told in a single volume of action, intrigue, wonder, and countless surprises. As Locus says, "You'll swiftly forget you're reading a first novel . . . this is a heck of a debut!"