Eclipse of the Warrior — J.L. Hendricks 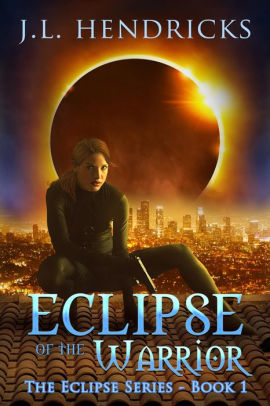 
Caught between the forces that be, It's no place for a human...

B'Lana Paris had only a few simple aspirations. A job, a house... a life. It can't get any more normal than that. But when a relaxing night at the movies turns deadly, leaving her with a sustained injury, B'Lana learns that her situation is much more serious. It might just seal her fate.
Caught in the clash between two aggressive dominions of ancient origin, B'Lana will be forced to decide between death and a slim chance at survival. With the unnatural curse consuming her life force her only chance to survive rests firmly in the hands of the one person she is the most unsure she can trust.
Will B'Lana be able to survive the fatal infection coursing through her blood? Or will a worse fate wait for her behind the veil of offered salvation?

Eclipse of the Warrior, the first of The Original Eclipse Series by J.L Hendricks, is a YA Urban Fantasy that will have you turning the pages so fast you'll spin off into another dimension. Clean and humorous with just the right dose of romantic elements, this is a story you don't want to miss!

This 46K word novel was previously released as 2 books (Eclipse of the Warrior and Eclipse of the Soul). Now in 1 book with new editing and an expanded story.