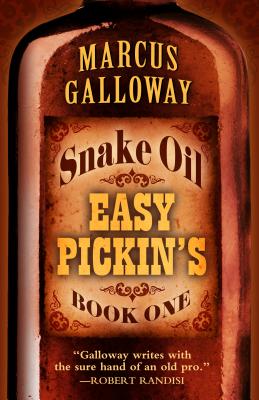 Share:
Professor Henry Whiteoak is a salesman, a con artist, and a cheat. Traveling in a brightly colored wagon, he sells chemical concoctions and steeply priced contraptions to any and all who attend his medicine shows. When he arrives in the small town of Barbrady, Kansas, Henry Whiteoak also shows his talents in a fight and a mind that’s sharper than a stiletto.

While Whiteoak may be a swindler, he is not one to turn away from those who are in need of help. After all, if the gunmen who’ve also found their way to Barbrady kill off too many of its citizens, there will be even fewer pigeons for him to pluck. Lyssa and Byron Keag get to witness firsthand the troubles plaguing their town and soon realize that a conniving salesman isn’t the worst of the bunch. In fact, if the real threat comes from some of the town’s most upstanding citizens, someone like Professor Whiteoak may be the only cure for what ails Barbrady.

Once the wheels of a violent scheme begin to turn and blood starts to spill on the streets of Barbrady, Henry Whiteoak quickly finds himself in a situation where simply riding away is no longer an option. Beneath the silver-tongued professor’s fancy clothes lies a silver-handled .38 and a firm resolve. Could that be enough to survive the scheme that’s set to put everyone in Barbrady onto their backs?