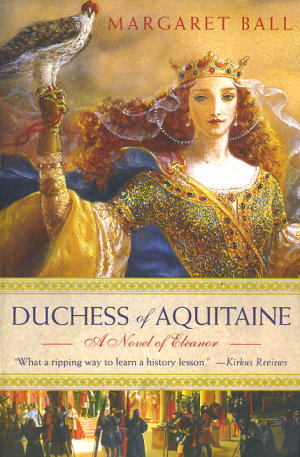 Share:
BEAUTIFUL AND BRILLIANT, ELEANOR is the daughter of the Duke of Aquitaine, whose glittering court is the twelfth-century birthplace of courtly love.
For all of the duke's boasts that Eleanor has the brains of a man and the soul of a warrior, everyone knows that a girl of fifteen cannot possibly hold the richest dukedom in France. Everyone, that is, except her dying father, who insists on leaving Eleanor his most valuable provinces -- and making her prey to the first baron who rides in to kidnap her.

Eleanor, though, is not content to sit idly by and let herself become a victim, and devises a plan to marry the heir to the throne of France. While her alliance to Louis VII may be a dazzling one, her husband is a cautious man whose wit and courage do not always match Eleanor's own, and she ultimately finds herself seeking an even greater match with Henry II of England. Sweeping from the courts of Paris to the perils of the Crusades, Duchess of Aquitaine gloriously illuminates the life of one of the most powerful, resourceful, and fascinating women in all of history.