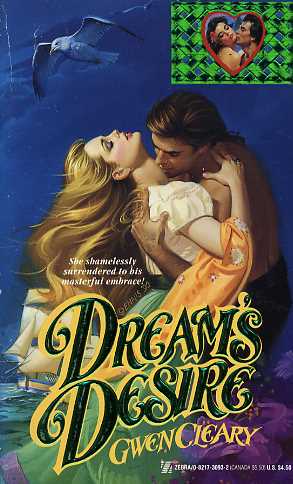 Share:
SHE CAPTURED HIS SOUL
Captain Michael Domino had no room in his heart for any mistress but the sea. For years, he'd sailed his merchant ship along the California coast in search of the man who'd nearly destroyed him, and at last revenge was within his grasp. Then a golden-haired, half-Spanish beauty distracted him from his cause. Anticipating an unforgettable night of loving, he tasted her sweet lips and stroked her silken curves. By the time he learned she was not only an innocent, but his enemy's runaway fiancee, it was too late to do anything but mix cold-blooded business with hot-blooded pleasure. And as he ignited the forbidden fires that burned within his sultry senorita, he vowed never to let another man possess her soft, smooth flesh!

HE FREED HER PASSION
Desperate to escape an arranged marriage to a man she detested, the proud and beautiful Antonia Winston y Ortega fled her father's hacienda clad only in the skimpy dress of a peasant maid. When the arrogant Captain Domino mistook her for a low-born, willing wench, she saw her chance for freedom. She would spend the night with this bronzed, blue-eyed scoundrel, for no gentleman would want a ruined bride. And ruined she would be, for Tonia would never forget his searing kisses, his white-hot caresses, or the way his warm, muscular body pressed against hers as he showed her the way to her