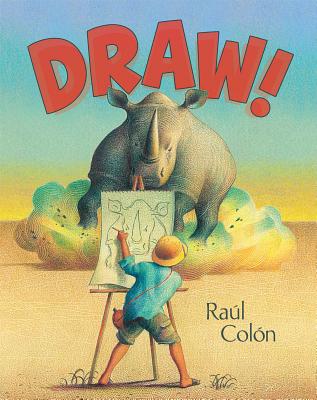 
Based on his own childhood, beloved and award-winning artist Raúl Colón's wordless book is about the limitless nature of creativity and imagination.

A boy alone in his room.
Pencils.
Sketchbook in hand.
What would it be like to on safari?
Imagine.
Draw…

A boy named Leonardo begins to imagine and then draw a world afar -- first a rhinoceros, and then he meets some monkeys, and he always has a friendly elephant at his side. Soon he finds himself in the jungle and carried away by the sheer power of his imagination, seeing the world throuhg his own eyes and making friends along the way.