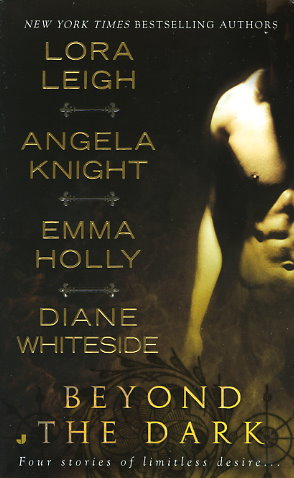 Share:
What can you feel in the dark?
How far are you willing to go beyond it?

Lora Leigh does it... in the lair of a strange breed, part man, part wolf, on the hunt for the woman he craves-and needs-to fulfill a hunger clawing at him from within

Angela Knight does it... in the psychic realm of a woman attuned to the touch of strangers-and the powerful temptations of a seductive and mysterious protector.

Emma Holly does it... in the fantastic Demon World where a powerful Queen rules-until she commits the sin of falling in love with the handsome son of her worst enemy.

Diane Whiteside does it... in an alternate universe of Regency magic where two lovers are threatened by a vicious mage, and swept up in a turbulent war off the Cornish cliffs.