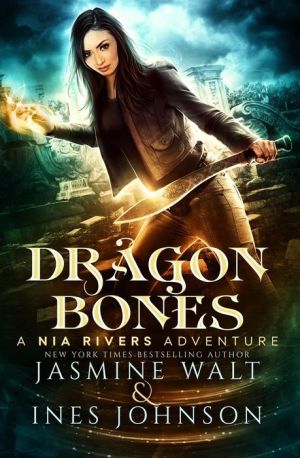 
Get the full series for 30% off when you grab this bundle today!

This boxed set contains the first three books in the bestselling Nia Rivers Adventures by Jasmine Walt and Ines Johnson. This action-packed series features an immortal archaeologist and her tomb-raiding side-kick as they uncover lost artifacts, tangle with Greek gods, cross swords with Templar Knights, and much more!

The first three books in this boxed set include:

For the last couple of centuries, Nia has been trying to fill in the blanks of her past by shedding light on history's darkest stories. Her motto: the ugliest stories are the ones that deserve to be told the most.

But when a mysterious woman comes forth with a two-thousand year old relic from Nia's past, Nia isn't sure if the story connected to it is one she wants told to the world. Unfortunately, Nia has no choice but to uncover the truth--fast--before a greedy land developer buries the site forever. The fact that he's also an immortal, with a millennia-old grudge against her, doesn't help. Neither do the dark assassins who have been stalking her for centuries, and who've suddenly decided to up their game to end her life.

Letting her enemies have their way might be best for Nia, especially when the truth might expose a horrific crime from Nia's past. But all stories deserve to be told.

Even the ugliest ones.

Even if they say you might be a mass murderer.

Nia Rivers knows that immortality comes at a cost. So when she finds out that the Greek gods have devised a way to offer everlasting life to humans, she heads down to Athens to find out more about the mysterious cult of Demeter.

What she doesn't expect to learn about is her own involvement in the rituals.

With her bestie, Loren, by her side, Nia must determine if the Olympians are the righteous gods they proclaim to be, or the villians in this chapter of history. The broken heart she's still nursing from Zane's betrayal, and the conflicting feelings she has for Tres, aren't helping. But if Nia can't get her head in the game, the Titans will rise again, and the souls of all humans on Earth will be at risk...

When an ancient relic of Camelot goes missing, who do Arthur and his knights call? Nia Rivers, ancient immortal and archaeologist extraordinaire, of course!

Nia jumps at the chance to go to Camelot, especially since she's been banned in the past. Thankfully, Arthur is willing to let Nia's past breaches of his castle, theft attempts, and a certain debacle with his sword be bygones if she'll help him recover the Holy Grail. But as Nia strives to keep her fingers to herself, enemies from the past resurface in a race to acquire the ancient holy relic.

As Nia and the knights head on a quest to get to the treasure, Nia gets a revelation about her heritage which could spell doom for those of her kind. She’ll need to find the grail before it falls into enemy hands and a prophecy comes true...a prophecy where the immortal life of someone she loves may very well come to an untimely end.

Don't miss out on this fantastic deal. Scroll up and grab your copy to save 30% on this set today!