Down Among the Dead Men / The Sunken Sailor — Patricia Moyes 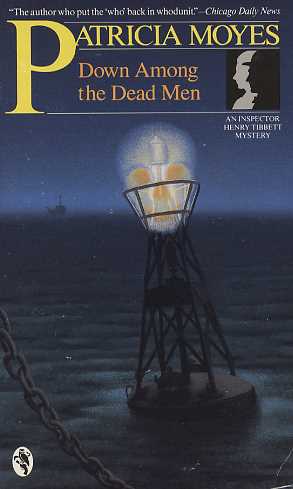 The crusty seafaring folks in the English hamlet of Berrybridge Haven generally agreed: Fog had caused the unfortunate accident that drowned Pete Rawnsley. A few old salts, however, whispered over their pints of bitter in the local pub that it was no accident at all.

The incident was long considered closed when Chief Inspector Henry Tibbett and his wife Emmy visited the hamlet on holiday. But yet another "mishap"--death in a dinghy--reveals the malevolent presence of a cunning killer. Local suspects emerge: the resentful old harbormaster, Herbert Hole; the eccentric aristocrat, Sir Simon Trigg-Willoughby; two boat owners named David Crowther and Colin Street; and the pretty-eyed mate, Anne Petrie. All had boats anchored at Berrybridge Haven, and all had reasons--and opportunities--to kill Pete Rawnsley. What Tibbett found most disturbing was that they all had decided to lie. Who among them was sending victims to watery graves?
Reviews from Goodreads.com