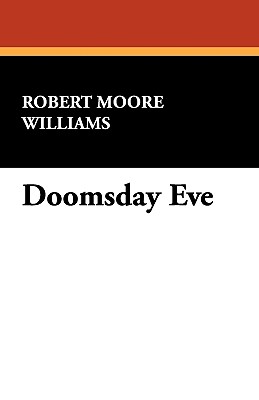 Share:
THREE TO CONQUER (Previously published as CALL HIM DEAD): It's the day-after-tomorrow in the USA. Wade Harper is a telepath, as far as he knows the only one in existence. He has managed to keep his paranormal abilities concealed, sure in the knowledge that his beloved government will try anything, including vivisection, to attempt to learn the source of his power. ~ ~~ ~ Until a chance encounter reveals to Harper that alien beings have invaded Earth --- and no one else on the planet can possibly detect them! Can he battle the menace without giving up his treasured secrecy? An all-time GREAT!

~ ~~ ~ DOOMSDAY EVE: Williams' apocalyptic future is an Earth which has been at war for half-a-century, with just enough use of atomics to destroy cities and industries, but not enough to wipe out the planet ~ ~~ ~ Stories are circulating in North America about strange people who seem to have even stranger abilities. Naturally the war government wants to find these people, if they exist, and conscript them. With manpower at a premium, a single intelligence agent, Kurt Zen, is sent to run down the rumors. To his astonishment, he discovers that every one of the far-fetched rumors was true, and that this band of "new people" represents normal humanity's only prayer for survival!