Don't Give a Witch — Amy Boyles 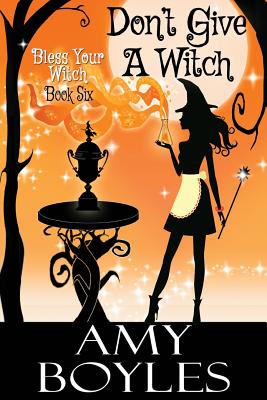 Dylan Apel is at it again… When the Magical Abilities contest is announced, Dylan couldn't care less about entering. But when she discovers the prize is the coveted Never Forget, a spell that makes you immune to mind erasing, she's all in. That is, until the potion is stolen. Now, she's on lock down in Castle Witch with a thief on the loose. But lucky for her, the witching elite has also arrived, and Dylan's convinced one of them murdered her super hot boyfriend, Roman Bane's, mother and sisters twenty years ago. All she has to do is slip a magical ring on the right person's finger and Dylan's got her killer. But when the ring is stolen, Dylan's not sure who to trust. Things get worse when her boyfriend is arrested for a theft he didn't commit, a close friend can't remember important details, and Dylan herself is accused of cheating in the contest. Before things get any worse Dylan must find a thief and a murderer—before she becomes the next victim of the Master. Don't miss another Southern fried witchery—read Don't Give a Witch today!
Reviews from Goodreads.com