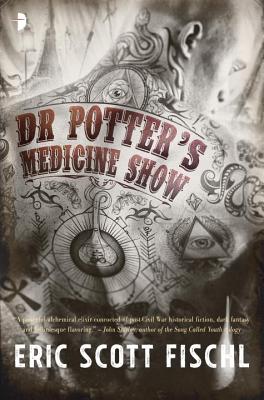 Share:
The year is 1878. Dr Alexander Potter, disgraced Civil War surgeon, now snake-oil salesman, travels the Pacific Northwest with a disheartened company of strongmen, fortune-tellers, and musical whores. Under their mysterious and murderous leader they entertain the masses while hawking the Chock-a-saw Sagwa Tonic, a vital elixir touted to cure all ills both physical and spiritual. For a few unfortunate customers, however, the Sagwa offers something much, much worse.

For drunken dentist Josiah McDaniel, the Sagwa has taken everything from him; in the hired company of two accidental outlaws, the bickering brothers Solomon Parker and Agamemnon Rideout, he looks to revenge himself on the Elixir's creator: Dr. Morrison Hedwith, businessman, body-thief, and secret alchemist, a man who is running out of time.