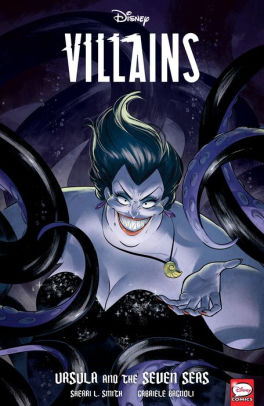 
Unveil the sordid history of the notorious sea witch Ursula in an untold story set long before the events of Disney The Little Mermaid.

Ursula is one of seven sea witches, each rule one of the Seven Seas. Bestowed with power and magic, the sea witches instill in the kingdoms envy, reverence . . . and fear. To maintain peace and bounty, the merfolk must make an offering to the witch that rules their sea--a sacrifice--the souls belonging to those of their own. The tithe remains undisputed, until one day Ursula's younger sea sister is found stripped of all her powers--one by one, the sea witches are hunted. Among the merfolk, there rises a maverick, one who dares defy the reign of the sea witches. Ursula must find the culprit and reclaim control, but there's much more at stake, and revenge isn't all she's after . . .

Award-winning author Sherri L. Smith (Flygirl, Sparrow, Orleans, Lucy the Giant, Avatar: Tsu'tey's Path) tells a sophisticated story of power, vengeance, and betrayal with the alluring art of Gabriele Bagnoli (Disney Snow White and the Seven Dwarfs). Peer through the black ink and tentacles and witness what makes Ursula one of Disney's most infamous villains!