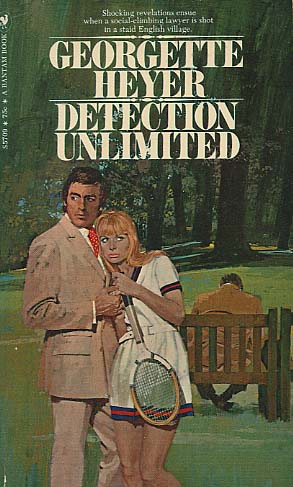 Share:
It was a hot June evening in the village of Thornden, the Hasells celebrate a tennis party at the Cedars, their mansion. The young Haswell had just motored the lovely Abby Dearham back from social event of the week. Nearly everyone of the village uppercrust had come to the party--the Squire, the Vicar, the sharp-tongued heir to five centuries of local real estate. But the unpopular solicitor Sampson Warrenby had declined, and no one was sorry. Why this charmless social-climber was invited was beyond Abby. Had he some sinister hold on the social leaders of Thornden? All joking was cut short when a wild-eyed girl came running down the lane. For it was Mavis, Warrenby's niece, announcing he was dead.

Slumped on a seat under an oak tree is old Sampson Warrenby, with a bullet through his brain. When the upstart solicitor is killed and everyone -- who at one time or another wanted him out of the way -- feels panic stricken. His body is discovered by his anxious niece, who is just one of ten people in the village in the running for chief suspect, having cause to dislike Warrenby intensely. Everybody in the village is ready to tell Chief Inspector Hemingway who did it. Could the murderer have been the dead man's niece? Or perhaps it was the other town solicitor? The couple at the farm had a guilty secret-what was it? And why is it someone else actually wants to be the prime suspect? Add to this the fact that Warrenby was blackmailing someone. Only Hemingway can uncover which of the ten has turned hatred into murder, but has his work cut out for him.