Destruction of the Overworld — Mark Cheverton 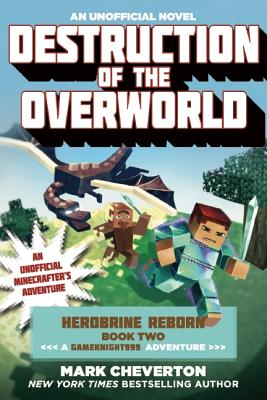 The Ender Dragon, infected by the Herobrine virus, has escaped into the Overworld!

This adventure series is created especially for readers who love the fight of good vs. evil, magical academies like Hogwarts in the Harry Potter saga, and games like Minecraft, Terraria, and Pokemon GO.

Gameknight999 and his father, Monkeypants271, traveled all the way to The End and banished the evil virus Herobrine to the only place they knew nothing could survive: the Void. They thought they had finally destroyed the enemy...

But through the Void, Herobrine's viral lines of code were able to spread all throughout The End, infecting the horrible Ender Dragon. After gaining the teleportation powers of the endermen, the dragon escaped out into the Overworld! Terrorizing Minecraft, the dragon's evil presence is now transforming the lush and beautiful land into the dark and desolate world of The End. It will be up to Gameknight999, his dad, and their NPC friends to defeat the dragon without releasing Herobrine, while at the same time battling a massive army led by Feyd, the king of the endermen, and Xa-Tul, the zombie king. With everything on the line, Gameknight must use every bit of skill and bravery to save the entire Overworld from destruction.
Reviews from Goodreads.com