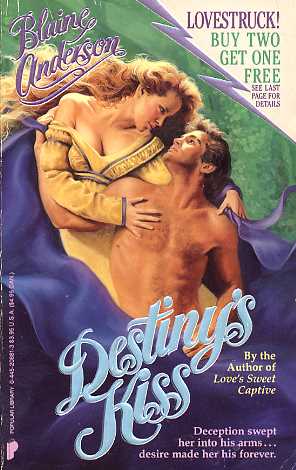 Share:
She Fled from Danger
Trembling, Lady Alysanna saw her stepsister's body on the library floor, and looming over it, the stranger who slayed her. With that violent act, Alysanna's world of privilege crumbled. She fled her ancestral home under a cloud of suspicion, at once so terrified and so lovely that a scandalously drunk and roguishly handsome lord could not resist her. Lord Cairn Chatham rescued her on the road to London -- then wanted her with a naked hunger that took her ...

Into a Web of Passion
Lord Cairn's bold sensuality and wry wit sent a flash of fire to the core of Alysanna's being. But h believed she was a lowborn governess, ripe only for seduction. Her life was already in jeopardy; now she could lose her heart. While desperate secrets plunged her into a nightmare ones and danger, desire swept her headlong toward the dark place where love's mystery could be revealed ... an where one burning kiss on her white satin skin could seal a lover's fate.