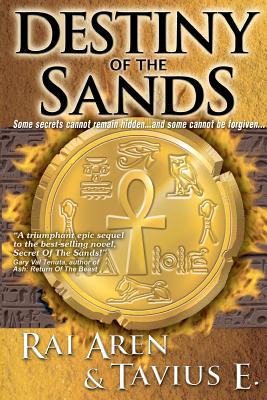 Share:
"Destiny of the Sands...the thrilling sequel to Secret of the Sands..." Destiny of the Sands continues the archaeological mystery tale of Secret of the Sands, taking the characters you've come to know and love on a darker, and far more perilous journey. Mitch and Alex, our young Egyptologists, along with their friends, Jack and Bob, are mysteriously called back to Egypt, just as a sinister enemy surfaces. Dark forces are on the hunt for the priceless, yet deadly ancient artifact Mitch and Alex unearthed eighteen months ago below the Great Sphinx of Giza. This powerful technological device, which had remained hidden for over 12,000 years, thrusts our friends into a fight for survival as they are outmatched and outgunned by a hostile adversary that knows exactly how to get to them. In the past, we see embattled King Traeus rocked by a devastating secret that has been revealed. This secret will change his life forever. Deadly threats emerge, spurred on by this shocking secret. Now there are no lines that will not be crossed in a terrible fight for power and in the name of vengeance. In both the present and the past, a secret that has been carefully guarded emerges, and nothing will ever be the same again. "Some secrets cannot remain hidden...and some cannot be forgiven..." "The Great Sphinx of Giza has guarded a secret, both dangerous and incredible, for 12,000 years. Now deadly enemies emerge, and those involved must face startling truths and deep sorrow, in the fight against the forces of tyranny..." "High adventure, past and present, merge into a multi-leveled tale of epic proportions in this triumphant sequel to the best-selling novel, Secret Of The Sands " - "Gary Val Tenuta, author of Ash: Return Of The Beast and The Ezekiel Code" The Continuation of a Journey... That began in Secret of the Sands, must now be resumed. Events have been triggered, difficult decisions were made. Time and fate lead those we have come to know down ever more dark and harrowing paths towards an inescapable destiny... A Dangerous Enemy... Surfaces with the intent to chart a new, terrifying, and deadly course of action. An enemy filled with greed and malice, who possessed no boundaries of morality, strikes. No one and nothing is safe, no matter how precious, how valuable, or how innocent. A Secret Once Buried... Is hunted for profit and pride as an ancient prophecy finally reveals itself, along with the startling truths it holds. Lives will be changed forever, for what was done, can never be undone. A terrible price will be paid for the secrets of the past. A Past that Cannot Be Denied... Continues to haunt, threatening to destroy any hope of a future without sorrow, pain and regret. Consumed by the mistakes of the past, possessed by hatred and a desire for revenge, enemies lash out. What was guarded for so long may be forfeit."